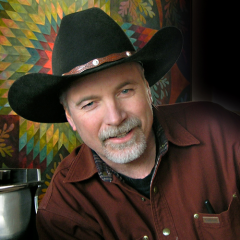 Ricky Tims has successfully blended two diverse passions into one very unique and interesting career. His skills as a pianist, composer and producer have been evident by the thousands who have heard his music. His success as a quilter is equally significant.Ricky's quilts  have won numerous international awards. He began designing and making quilts in 1991, and was recently named as one of The Thirty Most Distinguished Quilters in the World. In 2009 he was selected (in a three-way tie) by the readers of Quilter's Newsletter Magazine as The Most Influential Person in the Quilting Industry. in 2008 he was profiled and featured on the popular television news show, CBS News Sunday Morning with Charles Osgood. He maintains an extensive international schedule of teaching and speaking engagements, is co-founder and co-host of The Quilt Show with Alex Anderson and Ricky Tims - an online, subscription-based TV show for quilters. He presents three-day Ricky Tims Super Quilt Seminars in select cities throughout the United States and holds week-long La Veta Quilt Retreats at his art quilt studio in the tiny mountain town of La Veta, CO. Since 2010, he and Alex Anderson are Co-Creative Directors of the lifestyle quilting magazine called The Quilt Life (published by AQS).