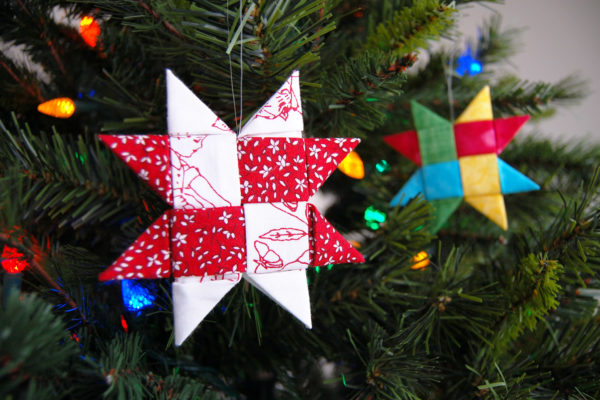 I’ve been playing with making simple folded Danish stars (sometimes called a German or Froebel star) from fabric to decorate for the holidays. While there’s a few methods you can use to create these folded stars (some methods include an extra step to create more points in the middle), I found that using sewn strips with this method reduced some of the bulk and creates nice, crisp corners. There’s just one straight line seam in these stars, the rest is all folding!

I’ll show you how to prepare the fabric strips for folding, then scroll down below for detailed video snippets to follow the folding instructions. 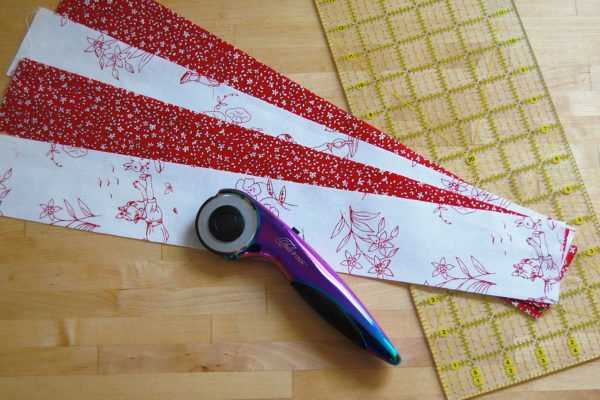 Get ready to sew a straight seam down the long end of each strip. 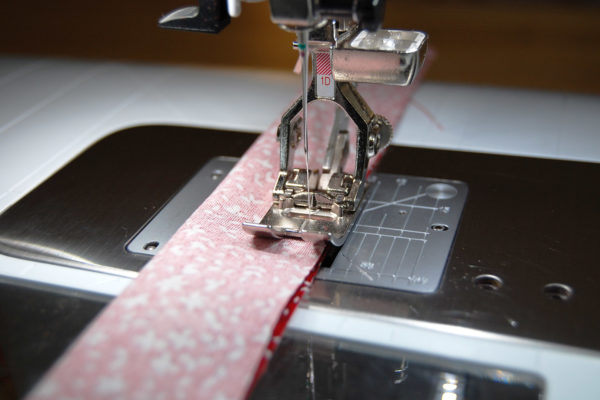 Fold the strip right side together long-ways, and stitch down the long end with a quarter-inch seam. Backstitch at the beginning and end of the strip. Use a bodkin or large safety pin to turn the strip right side out. When the strip is turned right side out, press well with the seam to one side of the strip. Roll the seam back and forth with your fingertips to make sure the seam is turned out all the way. 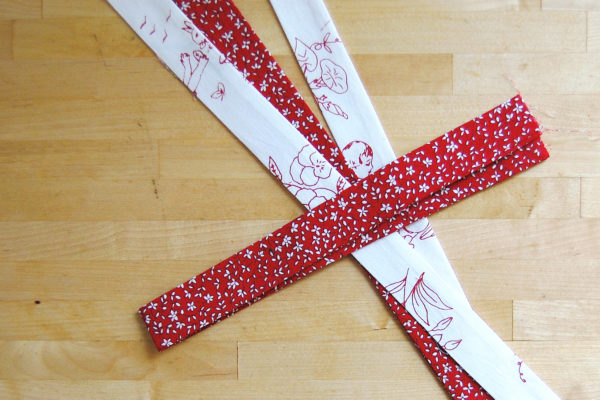 When all the strips are pressed flat, fold each one in half long ways and press a crease in the strip. 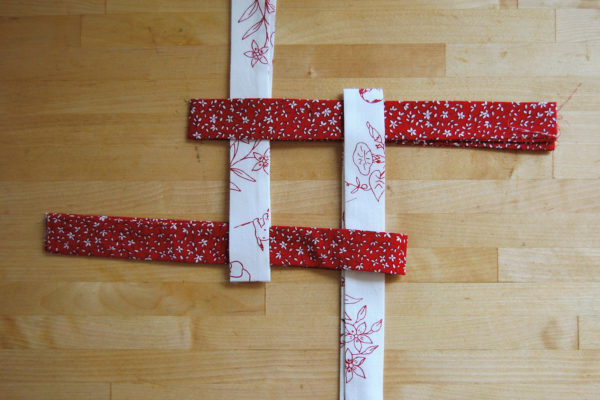 Now you’re ready to put the strips together and start folding the star! It’s easiest to see how this process works with the video snips below using four different colored strips. If you’ve ever made these stars with paper strips, it’s a similar process, first you arrange the strips to overlap. 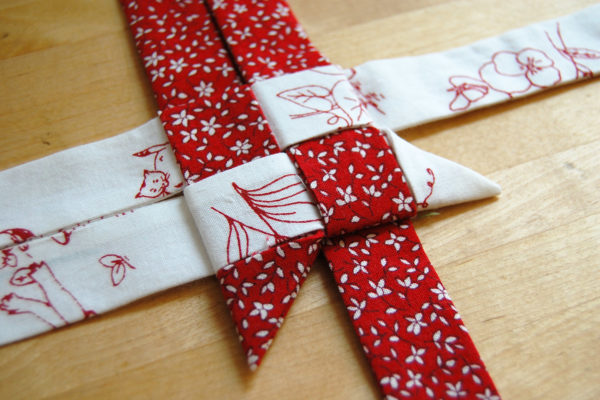 Start folding the fabric and tucking the star points… 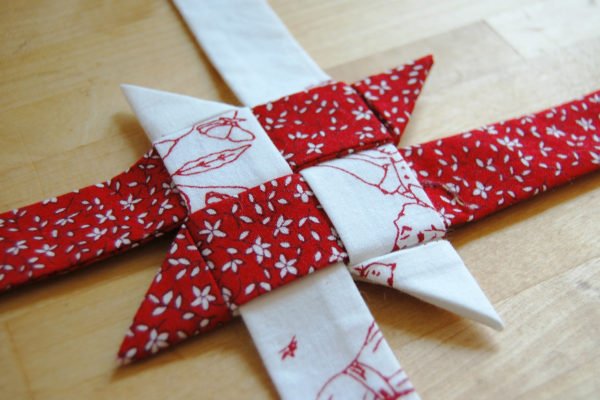 Until you’re all finished. 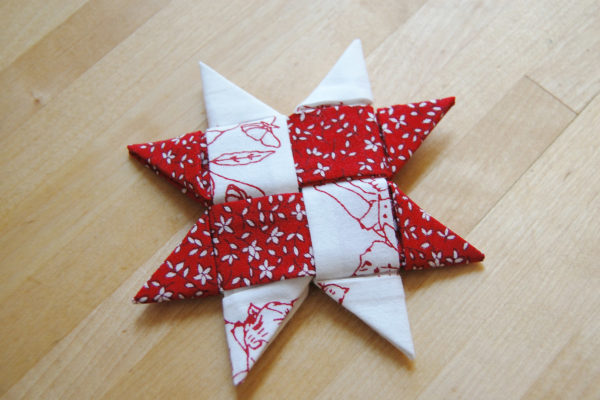 I use a large needle to add a hanger. You can use embroidery floss, fine ribbon, or heavy thread. I use a heavyweight monofilament cord for beading, it’s strong yet looks invisible when the starts are hung on the tree. 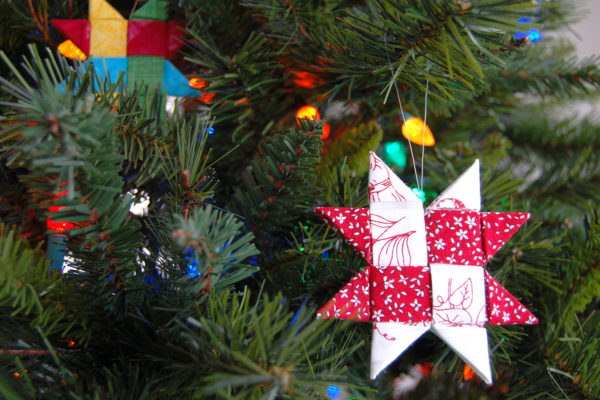 How to Fold a Danish Star

Give the strips a slight tug to tighten up the middle, and press well before moving to the next step.

Give the strips a slight tug to tighten up the star, but don’t pull so hard that the fabric scrunches up. Press well before moving on to next step.

To make the points of the stars, start with the bottom strip on the right side of the star. Fold as shown in the video clip above. It helps to press each point as you fold. Snip off the extra fabric from the strip before you tuck it in to the star; lay it across the strip it will be tucked underneath and cut about 1/4″ off the overlapping end. Be careful not to cut into the other strips in the star!

Press the point well before moving on to making more points.

Move the star around, and repeat step 4 to make the next star point. Keep rotating the star until you have finished the first 4 points.

After making the first four points, flip the star over to the other side. Starting with the strip on the right side of the star, follow step 4 and 5 to complete the other points.

Once you have tucked the very last point end in the star, you are finished!

Add your hanger and hang your star! 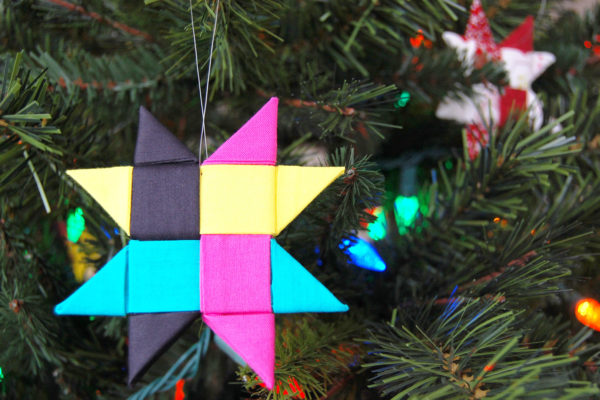 15 thoughts on “Make a Danish Star Ornament With Fabric”