There are so many different types of threads to use with your sewing machine! Not only is there a multitude of thread types, but threads come on all different kinds of spools, and can be wound on the spool in different ways. 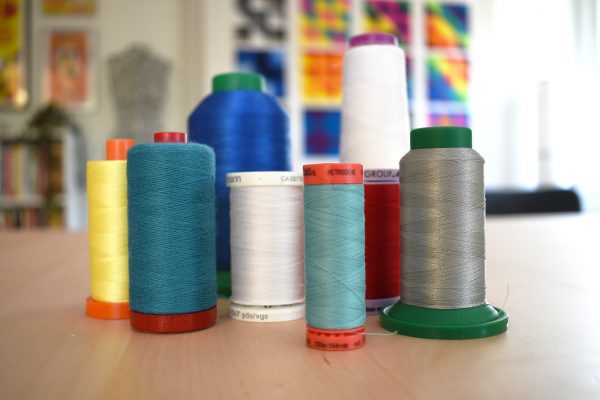 Before we look at best ways to mount thread spools on your sewing machine, let’s look at how threads are wrapped on a spool. Generally you will find thread wrapped either in a cross-wound style, or in a stacked style. 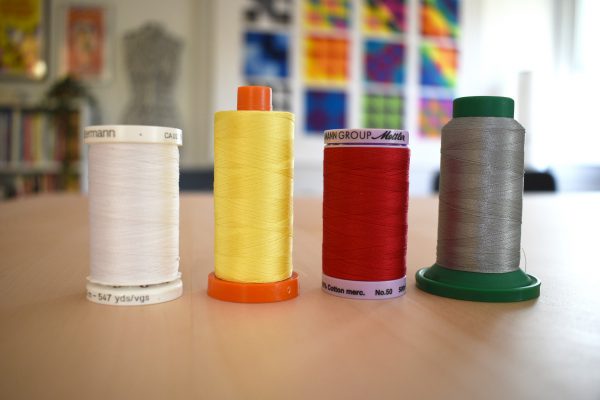 Cross-wound thread will create an “X” looking pattern on the spool. Here are several examples of cross-wound spools from left to right, Gutermann Sew-All thread, Aurifil 50 wt cotton thread, Mettler 50 wt silk finish cotton thread, and Isacord 40 wt embroidery polyester thread. Notice the different types of spools, some have one larger end, and some are the same on both ends. There are even cross-wound cones of thread you can use, which are too big to mount on your sewing machine (and we’ll look at these later). 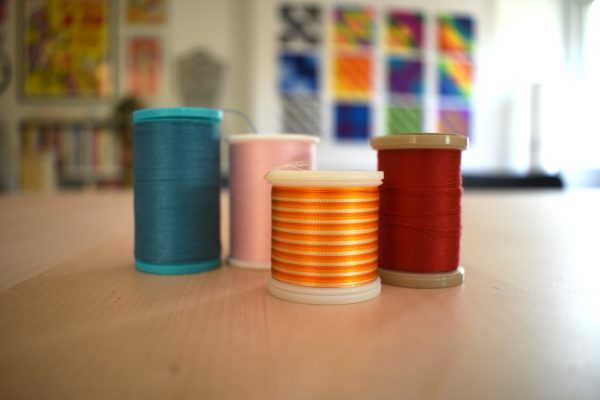 Stacked thread is wound around a spool so it stacks up, one row of thread on top of another. It creates lines parallel to the ends of the spool. These examples include from left to right, Coats & Clark heavy quilting thread, Coats & Clark Dual Duty thread, Madeira rayon embroidry thread, and Coats & Clark Heavy Duty thread. Thread spools that are stacked are generally symmetrical on both ends.

How to Mount Cross-Wound Threads 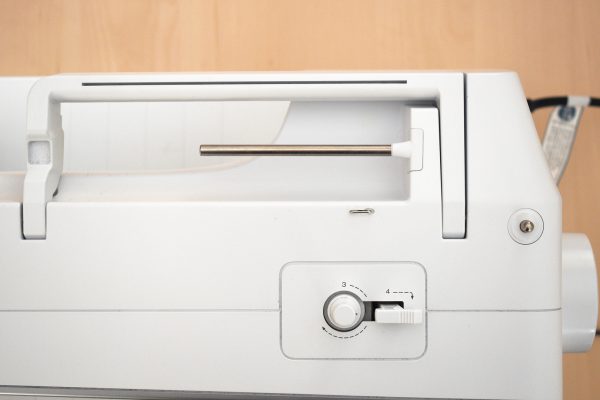 You will need a foam pad and spool cap to mount cross-wound thread on your vertical spool pin. 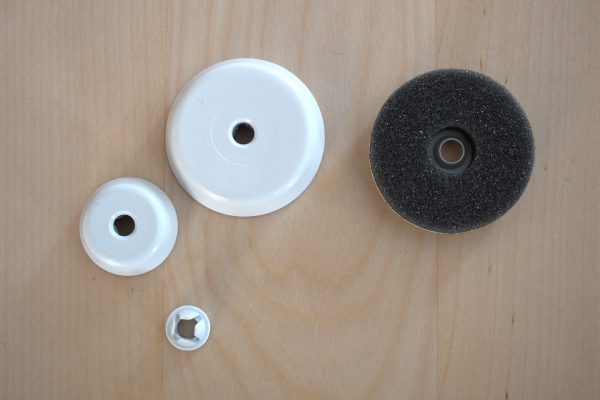 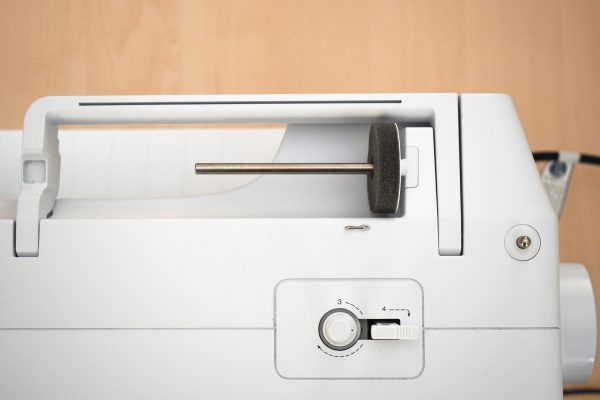 If you thread spool has one large end and one small end, always mount the larger end to the back of the spool pin.

You can also use a free-standing thread stand. 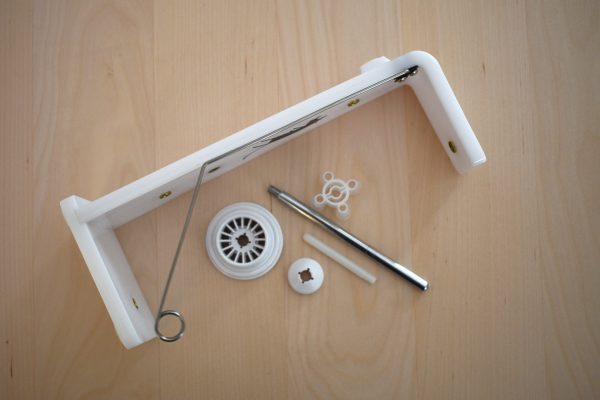 I use a basic thread stand from Superior Threads (ask your local BERNINA store if they carry this stand). This thread stand has options to mount both cross-wound spools, stacked spools, small spools, and large cones. (And no, the cute kitty sticker does not come on the thread stand, I added it myself!) 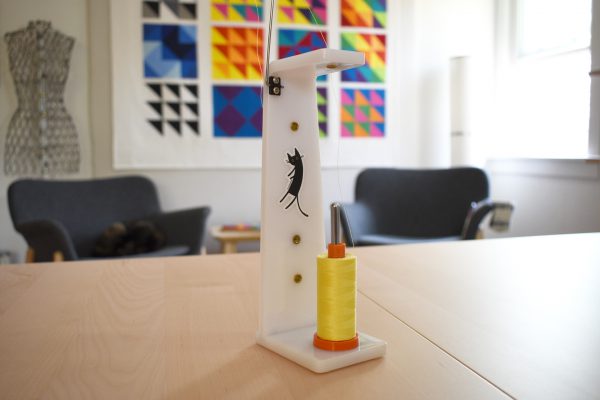 To use the Superior Threads stand with this cross-wound Aurifil spool, the spool pin is mounted on the bottom. The spool sits right on the spool pin, and gravity does the rest. The thread end goes through the guides on the stand, and you are ready to thread the machine. The proper placement of the thread stand is near the end of your machine. You can place it close to the right side, or to the back. Use the thread guide near the horizontal spool pin on the machine to start threading through the machine. 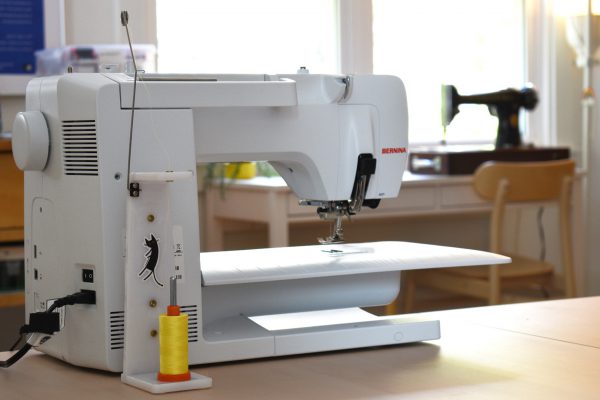 Now let’s look at how to mount two other styles of cross-wound spools to your horizontal spool pin. 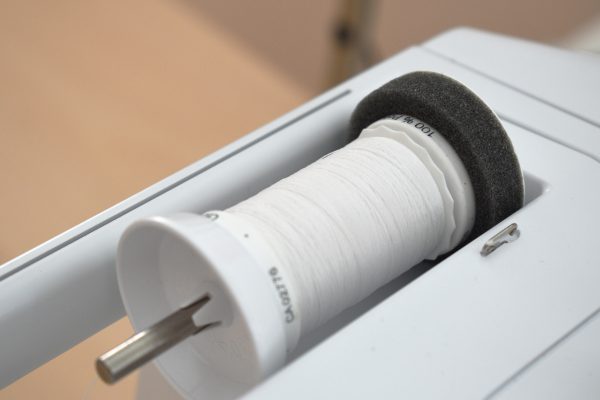 This cross-wound Gutermann spool of thread does have two ends that look the same, but look closer. One end has a starred, spiky end meant to catch and hold the loose thread end when not in use. This spiky end can catch and pull the thread when feeding off this end, so make sure to place this end to the back of the spool pin against the foam pad. 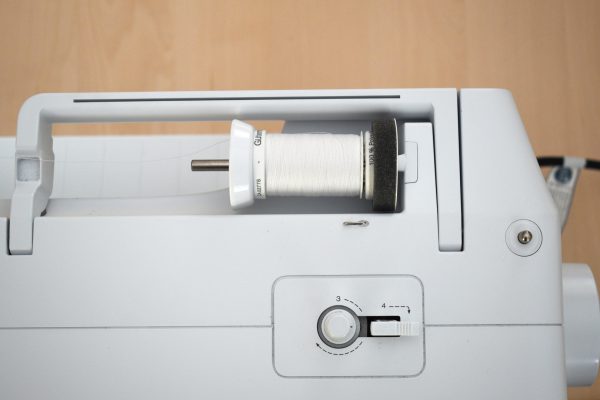 This larger spool also need the larger sized spool cap. Now the spool is mounted properly and can feed smoothly off of the spool pin. 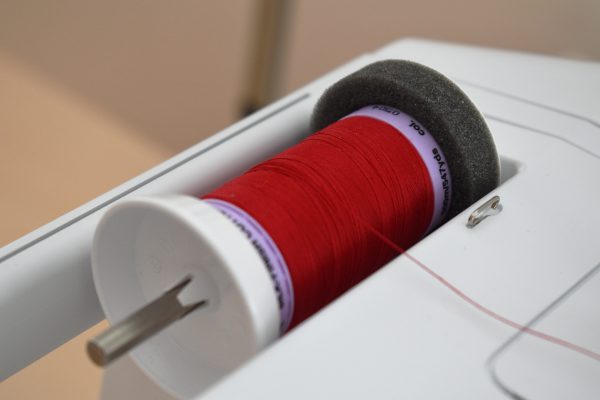 This spool of Mettler is the same on both ends, and there’s nothing stopping the thread from feeding smoothly off either side of the spool. In this case, place the spool on the spool pin so the thread is feeding over the top of the spool. Use an appropriate spool cap, and you’re reading to finish threading and start sewing. 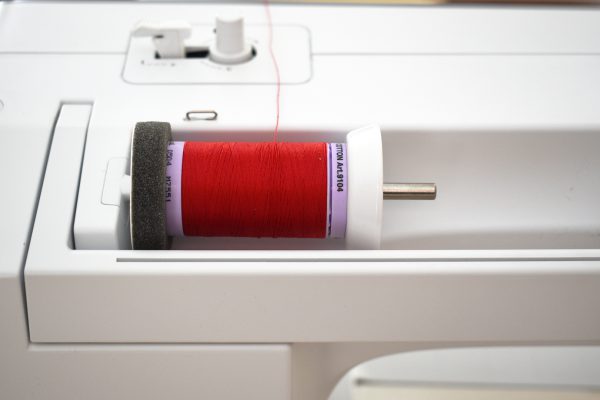 Another option for your BERNINA is to use the Multiple-spool holder that can mount on the back of the machine. 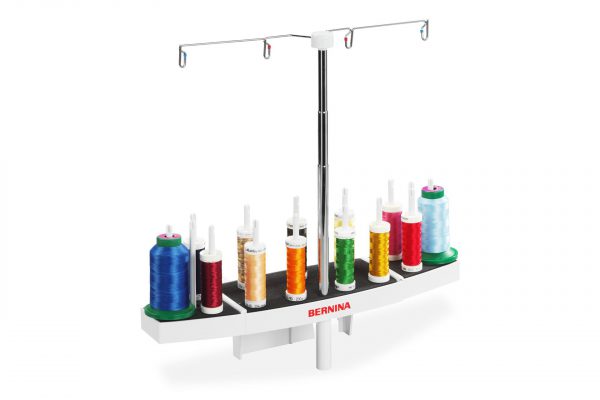 The Multiple-spool holder is compatible with a wide range of sewing machines. The holder can be used with cross-wound spools of all sorts, and is large enough to use with cones of thread. And there are extensions you can purchase to add more room for spools! Just check with your local BERNINA store staff to ask about purchasing the Multiple-spool holder for your model BERNINA.

What if the spool or cone is too large to mount directly on your machine? Here’s where either the Multiple-spool holder or free-standing thread stand come in handy.

The Superior Threads stand comes with a special adapter for use with cones. Insert the adapter over the spool pin to mount a cross-would cone. 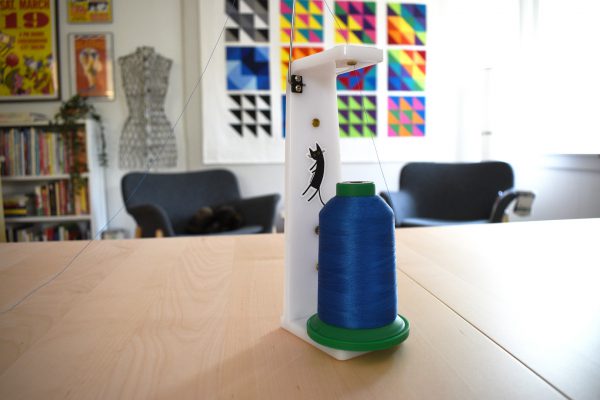 Place the thread stand near your machine, start threading with the thread guide on top of the machine near the horizontal spool pin, and you are ready to start sewing!

How to Mount Stacked Threads 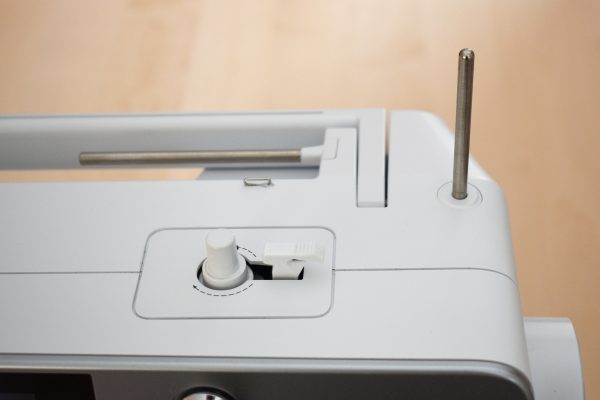 Use your built-in vertical spool pin to mount a stacked thread spool on your machine. 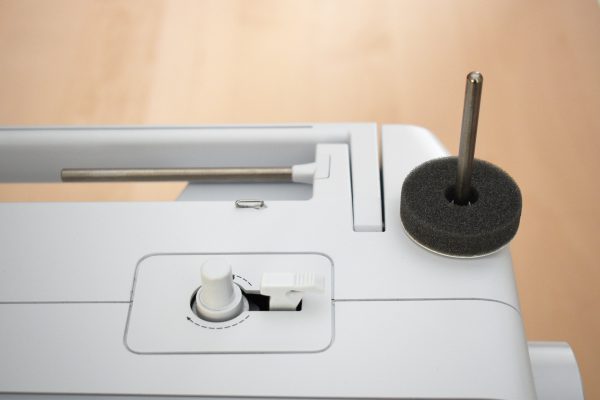 Add a foam pad to the base of the spool pin to help keep the thread from coming off and wrapping on the pin underneath the thread spool. 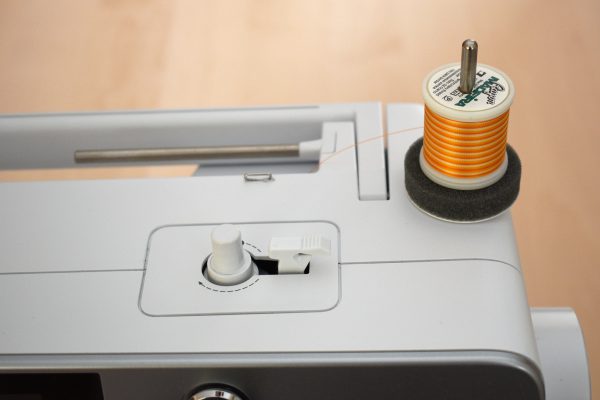 Place the spool on top of the spool pin, and make sure that the spool can move freely when pulling thread from the spool. Sometimes a sticky label may cause the spool to occasionally catch on the pin while sewing. 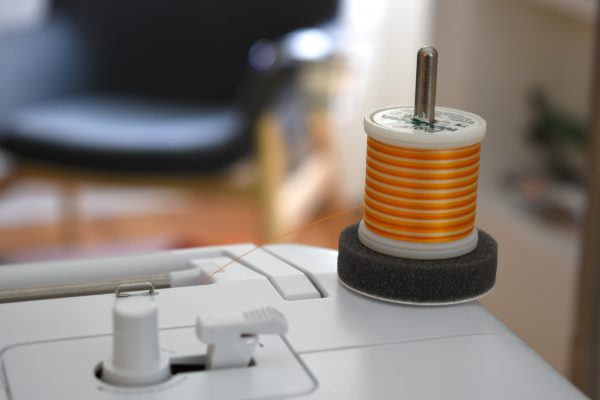 There is no need to add a spool cap to the pin, gravity will hold the spool of thread on the foam pad while you sew. 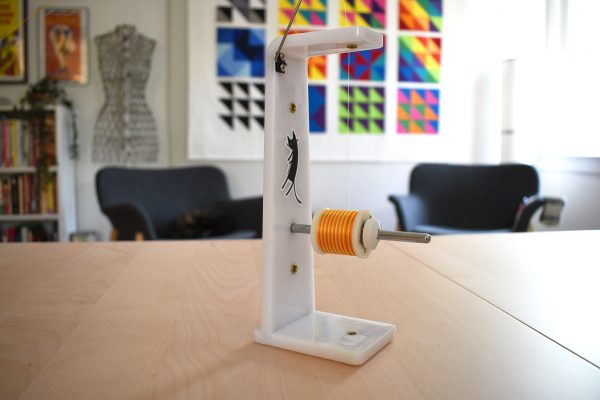 You can also use a thread stand if it is compatible with stacked spools. The Superior Threads stand allows you to move the spool pin from the vertical to a horizontal position, allowing the thread spool to spin as the thread winds off the spool. In this case, a spool cap is used just to keep the spool from spinning off the end of the horizontal spool pin. Place at the end of your machine and begin the threading process through the machine with the top thread guide near the horizontal spool pin. And now you’re ready to start sewing! 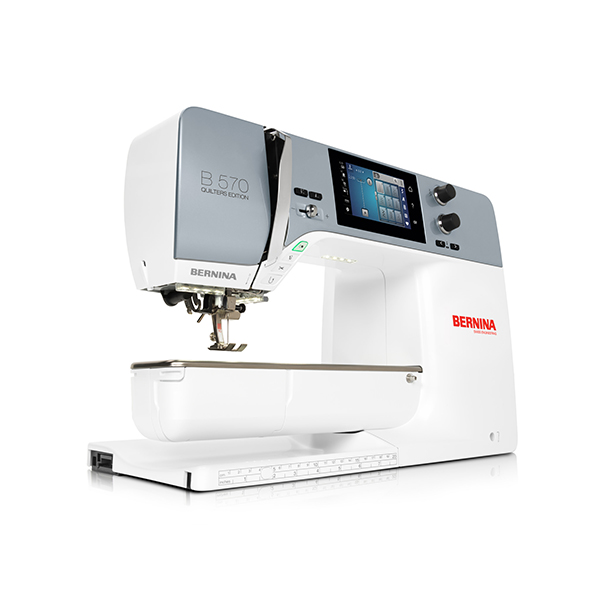