These tiny, tailored tucks look great on a variety of projects, from baby bonnets to blouses to decorative pillows. Pintucks are a great way to add texture and interest to fabric without going overboard. It’s a subtle embellishment that is fairly simple to sew. Stitching pintucks requires a double needle to work with a pintuck foot to create ridges of texture on the surface of the fabric. The main thing to learn about sewing pintucks is the setup of the machine. Once you have mastered that, all you have to do is sew and you have pretty pintucks! 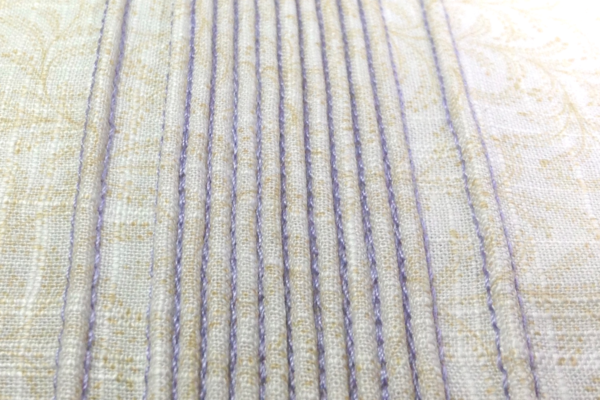 BERNINA has several pintuck feet and the ones we’ll cover in this post are the four basic pintuck feet, #30, #31, #32, #33. These feet look very similar and in fact, the only difference is the size of pintucks they each create. I use these feet on my B 790 PLUS but they work the same way on any model BERNINA sewing machine. 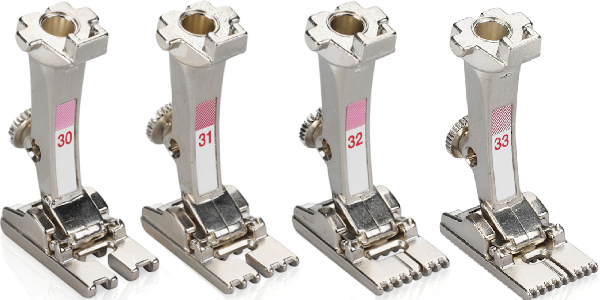 If you turn the feet over and look at the bottom of the soles, you’ll see a series of grooves on each one. These grooves determine the size of the finished pintuck. The options are 3 grooves, 5 grooves, 7 grooves, and 9 grooves. As the number of grooves increase, the size of the pintucks decrease. The presser foot you use depends entirely on the desired finished size of the tuck and the weight of your fabric. 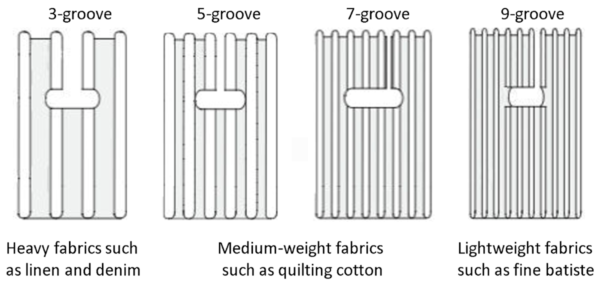 The size of the double needle needed is determined by the presser foot selected for making pintucks. Double needles are labeled according to the point size and the distance between the two needles. For example, the package may be marked 90/3.0. This means the needles are size 90 and there is  3 mm space between them. To test whether a needle can be used with a particular pintuck foot, place the needles in the grooves on the bottom of the sole. The needles should be side by side in two adjacent grooves. If they both fit in one groove or if there is an empty groove between the two grooves that the needles fit into, the double needle will not work with the foot. 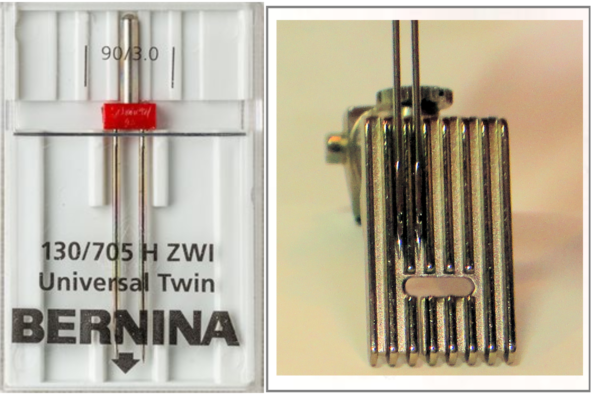 You can incorporate cord  into the pintuck to add structure and shape. Use are crochet cotton, perle cotton, embroidery floss, topstitching or any other narrow cord that will fit into the groove of the selected presser foot. The Pintuck Cording Attachment is an accessory that holds the cord as it goes under the needles. 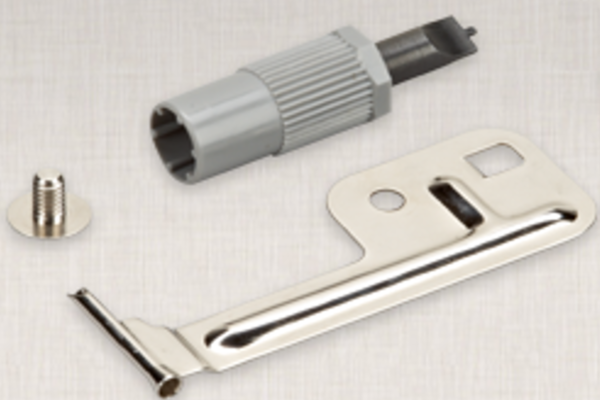 It easily attaches to the bed of the machine with a single screw. Feed the cord into the flared  opening that makes it easy to put the cord in place. 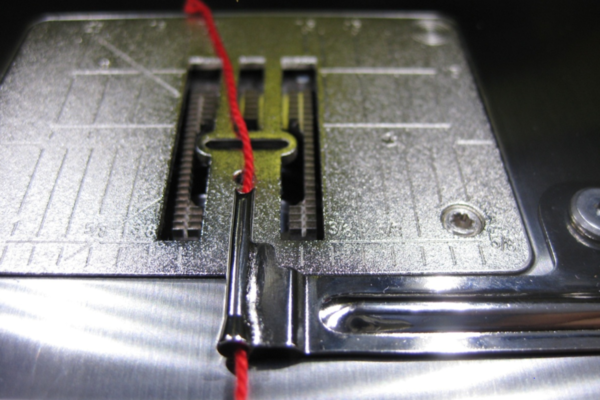 If your cord is on a skein or cone, it can be slipped onto the Freehand System, where it can easily feed into the pintuck as it is sewn. You’ll need two spools of thread, usually of the same type and color. Thread both threads in the same way as when using a single needle with two exceptions. The first is when you thread the two threads into the tension discs. Place one thread on the right and one on the left of the the disc. Continue threading the two threads together as usual until you come to the very last thread guide before the needle. Place one thread in this guide and bypass it with so the other thread so they are separated as they go into the needles. This keeps them from tangling as the needle stitches the pintucks. 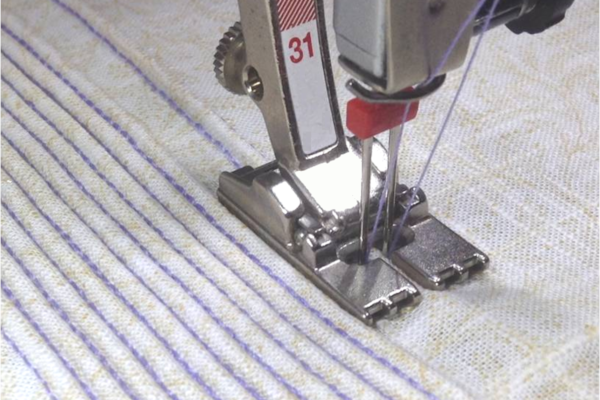 Before starting to sew, use the handwheel to bring the bobbin thread up to the surface of your fabric.

Once you have the machine set up, all you do is sew the same way you always do! The pintuck is formed as the fabric is pulled up into the groove on the sole of the foot. The cord is held in place by the bobbin thread, which makes a zigzag stitch on the back of the pintuck. For more definition of the tuck, tighten the needle tension slightly. Once you stitch one pintuck, put the fabric back under the foot, placing the first pintuck in one of the grooves for perfect spacing. 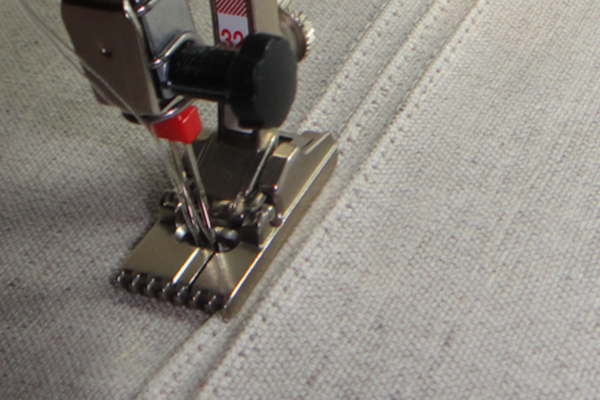 If you want very close pintucks, position the tuck in the groove of the foot next to the center groove, on the right or left. This creates very close pintucks. Continue doing this to create a band of texture as desired. Add space between the pintucks by placing the first tuck in a groove that is farther away from the center. Add even more space by placing the side of the foot next to the previously stitched tuck. See more We All Sew posts on pintucks:

How to Sew Pintucks: Free Video

For more information about pintucks, see The Big Book of Feet at your local BERNINA store 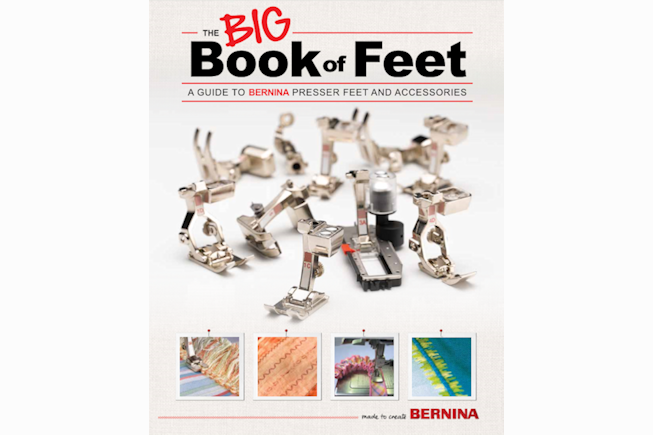 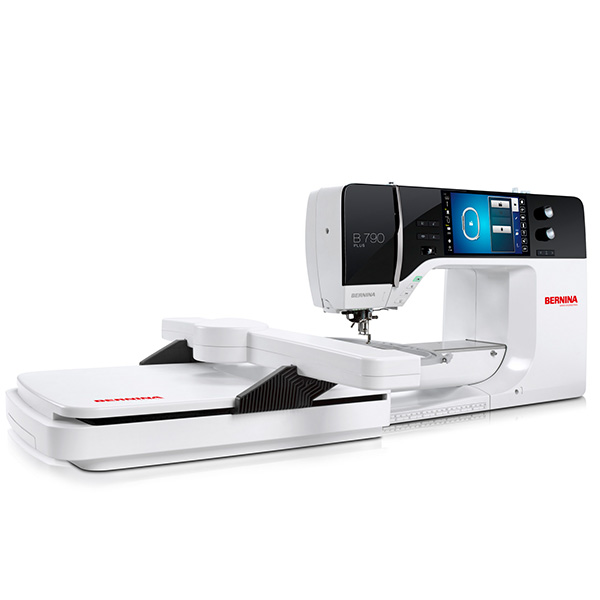 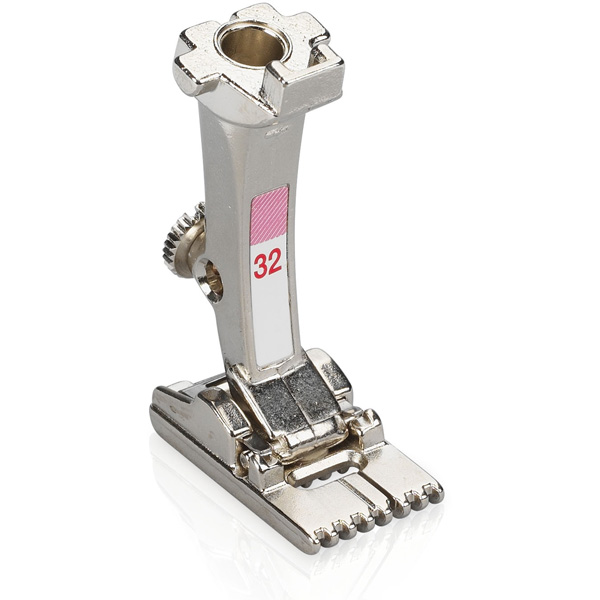